This is my first ever blog entry here – a new venture I am trying out, that I may or may not continue. Feel free to give me any (nice!) feedback you want…

I went to see Cate Le Bon at Leaf in Liverpool last Tuesday night – I started off with a quick pint in a favourite pub, The Dispensary before heading to the venue in time for the support act – Sea Lion. I can’t remember the last time I’ve turned up at a venue before the first band and it’s been so packed. Sea Lion is a solo Swedish songstress who was rather too twee for her own good, with a sickly sweet voice and an über-indie outfit including a stripey top and bowl fringe. She had something going for her though as rarely have I seen such a rapt audience for an opening artist. There were shades of Felt in there, which is never a bad thing, but I can’t really imagine wanting to put on one of her records, so that saves a few quid… Kudos to her for covering a Damien Jurado song, which you don’t get every day.

Then came the Welsh singer Cate Le Bon (and no, she’s no relation to the serial blazer-sleeve-pushing-up Simon). She has a look of Nico meets Jehnny Beth from Savages, and the rest of her band reminded me of a hodge-podge of other people. However, that tends to be something I seem to do at gigs – try and think of who the band members look like. This time we had Blonde On Blonde-era Bob Dylan on guitar, a former Shins keyboardist Martin Crandall-lookalike on bass and a fella a bit like Sion, who I know through the football, on drums. In reality, this was a bit of a Welsh super-group as the guitarist was H. Hawkline who actually supported Le Bon in his own right when I saw her at Leaf back in September 2012. The bassist does his own stuff as Sweet Baboo, who I’ve heard in session on Marc Riley. I’m not sure what else the drummer does, but I think he was revealed as being a Kiwi. The whole band had a good matching black look (what they were wearing, not their mood…) and there were some top harmonies going on. Harmonies are a bit of a forgotten art these days it seems (a thought I’ve pinched off listening to The Big Takeover podcast, where the point was made about how small a role harmonies play in modern music, especially away from the mainstream). 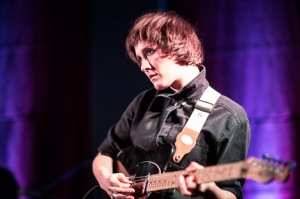 Anyway, back to the music. Cate played lots off her latest album, “Mug Museum” (so named after what an ex-flatmate used to refer to her room as due to the constant piling up of used cups!). There were also songs from her first two albums, “Me Oh My” and “Cyrk” Things really kicked into gear with “Are You With Me Now?” off the new record. I’m not going to list all the songs played, largely because I don’t remember which one was which all that well, but suffice to say it was a set chock-full of goodies, despite a few technical difficulties with H. Hawkline’s keyboards. One of the songs got dedicated to Cate’s Uncle Roger who was stood at the bar next to me, who she apparently hadn’t seen for years. After the obligatory stepping off stage for a few seconds, it was time for the encore, which included an oddball song that rang a bell with me. However, I couldn’t place it so had to resort to Google to discover it was actually “Frank Mills” from the “Hair” soundtrack, but I knew it from Lemonheads’ “It’s A Shame About Ray” album – though I don’t think I ever realised it was from “Hair”. The song has the oddball-but-great line, “He was last seen with his friend, a drummer, he resembles George Harrison of the Beatles but he wears his hair tied in a small bow at the back.” Just to round the evening off, the first record put on after the gig ended was Abba’s “S.O.S.”, which was a good tune to send me off into the night.

OK, this is likely to be regular feature of my gig reviews, as I usually try and select my t-shirt for a gig with some care. One major difference I’ve noticed between gigs in London and in Liverpool is the much smaller number of band t-shirts worn up here. I’m not sure how much that is to do with the comparative lack of cloakroom facilities here, and how much is a cultural thing. Anyway, tonight’s t-shirt choice was Y Niwl, a Welsh surf instrumental band I saw supporting the mighty Jim Jones Revue a couple of years ago. Yes, I selected the only Welsh t-shirt I had to go and see a Welsh singer. Shallow, maybe, but it made sense to me. And of course it was red.

PS The photo was pinched off Peter Guy’s GetIntoThis on liverpoolecho.co.uk, so I hope he doesn’t mind!