Macca was on top form when I saw him at the Arena last month with My Beloved Wife. This time, The Boy Wonder’s Nana was on babysitting duty, but we managed to put him to bed before getting a taxi straight to the venue.

We made it there in good time and so were seated well ahead of his thirty-minute warm-up video loop of old photos and artwork, that ramped up the tension slowly but surely. There were also a series of oddball cover versions of songs by The Beatles and Macca solo being played. Most unusual was probably the reggae version of A World Without Love, originally written by Macca for Peter & Gordon in 1964.

This was Macca’s first Liverpool concert since his On The Run show at the same venue in December 2011 that we had also attended, this time bringing his Out There tour to the city after two London dates and a gig in Birmingham. Overall the set list seemed to provide a much more varied evening than that previous, rapturously received visit to the city.

This time around he delivered another stunning near-3 hour set from across his unparalleled back catalogue, kicking off with Eight Days A Week, including a smattering of unusual choices to keep things fresh for him and us. I’ve had an articles about this show published on Getintothis, so anyone stalking me will have read some of this before, in which case, apologies! 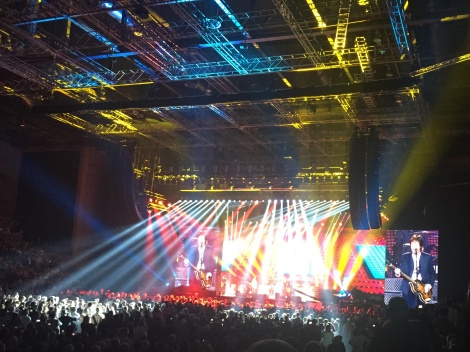 He was ably supported by long-term collaborators guitarist Rusty Anderson, Brian Ray on guitar and bass, keyboardist Paul ‘Wix’ Wickens and driving force drummer Abe Laboriel Jr., who together have formed his backing band for well over a decade. So this is the longest-running live band line-up he has ever been a member of.

McCartney demonstrated his desire to offer his fans something unexpected alongside the much-loved classics. Of course, his set included the likes of Hey Jude, Let It Be and Band On The Run, all of which he has performed in excess of 500 times over the years.

However, he also threw in the 1980 electronic oddity Temporary Secretary that he had never before played live until the UK leg of this Out There tour. He warned the audience that this might be a song where he would see considerably less light from phones taking pictures or recording video than when he sings a Beatles or Wings classic.

This proved to be a very early highlight for me. I’d read that he’d added this to his set and was absolutely thrilled he played it. Possibly my favourite song of the night came next, Let Me Roll It, featuring some great keyboard work.

Also making its live bow on this tour was Another Girl from 1965’s Help! album, while he also slipped in three tracks from his 2013 New album and the more forgettable video game tune Hope For The Future.

In fact, 22 of the forty songs played had not got an airing at his previous Echo Arena gig, with beloved Beatles songs Eight Days A Week, I’m Looking Through You, Lovely Rita and Being For The Benefit Of Mr. Kite! all making their live debut in his hometown, while he and guitarist Rusty Anderson engaged in some top notch feedback at the end of Paperback Writer, with Macca apparently playing the guitar he used to record the song back in April 1966.

The 72-year old was in remarkably fine voice, a couple of very minor wobbles aside, as he stretched himself from ballads such as My Valentine, written for wife Nancy who was present, to ballsy rockers like Back In The USSR and Live And Let Die (complete with obligatory fireworks display). He remains in remarkably good shape for his age, despite his customary lack of even a sip of water whilst on stage.

There were cheers, singalongs, placards being waved and just enough chat from the stage to make us all feel at home without having to listen to any tired anecdotes, and even some tears around me at the end of Here Today, Paul’s 1982 tribute to the late John Lennon, performed solo atop a stage riser, as was Blackbird. Not to be forgotten, George Harrison received his usual acknowledgement with a ukulele-driven version of Something. 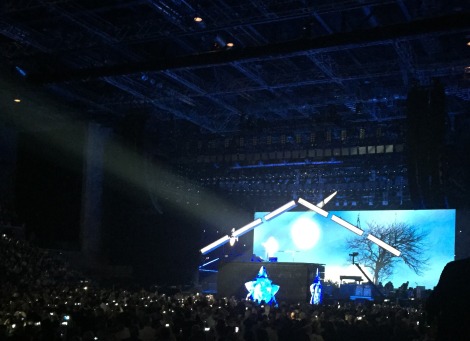 After nearly two and a half hours, the band left the stage, but returned for two lengthy encores, and an on-stage proposal featuring a somewhat merry French couple. The show finally ended with Helter Skelter and a truncated Abbey Road medley leaving the capacity crowd on a high.

He left the crowd begging for more having wowed the capacity crowd for practically three hours. And there could so easily have been more as he left unplayed nineteen Beatles songs that topped the charts in either the UK or US, and another nine of his that have done so since the band broke up. That’s just an indication of how many massive hit records this man has been involved in over the years.

The show finished too late for us to make the last train home without running across town, so we decided on a quick drink in The Hub before I made my first (successful) use of the Delta Taxis app to get a cab to collect us. On the way out we’d managed to pick up one of these signs that were being handed out on the way in, which people held up at various points:

I wore my red Parlophone Records tee. There were fairly few band t-shirts in the audience, with all bar one that I spotted being either The Beatles or Paul McCartney solo. The one rogue t-shirt I noticed was Queen.

Here are some selections from the set, with lots of versions off various live albums as most Beatles songs aren’t on Spotify: