This was my first ever experience of the Liverpool Psych Fest, which took place on the Friday and Saturday at Camp & Furnace, and nearby venues. I was only there on the latter day, as the line-up was much more immediately appealing on that day, although part of the appeal of an event like this is to try out bands I’ve never heard of and discover new loves.

After an afternoon at Anfield to witness the mighty reds beating Aston Villa, I managed to grab a taxi on Walton Lane, hoping to make it to the festival by 5.30pm. However, it turned out to be a extremely slow journey, so I didn’t make it there until about 6.00pm.

I had to go to the Baltic Social to exchange my ticket for a wristband, and then headed straight to Furnace, via a pint of an American IPA, to see Death And Vanilla.

I knew nothing of this Swedish combo, other than the positive write-up of them in Getintothis’ feature on the Top 11 acts to catch, but I can certainly see why things I’ve read since have referenced Mazzy Star, The Left Banke, Stereolab and Broadcast.

However, the band that came to mind most when watching them was Young Marble Giants, which is never a bad influence to reflect.

Singer Marleen Nilsson coped admirably with a broken keyboard, meaning she had to use a totally unknown instrument. The second song was a bit more driving than the opener, with some nice repetitive xylophone and scratchy Sonic Youth-esque guitar, while I was also reminded of the more experimental side of Flying Nun Records, like The Dead C..

They followed a windswept instrumental with Shadow And Shape before the most tuneful, but least interesting song, of the set, California Owls. After Follow The Light came another very YMG-esque number.

I stopped off for a burger outside before heading round the corner to District to see Greek band The Callas. I’d previously seen both Amsterdam and Billy Bragg there, when it was known as the New Picket. 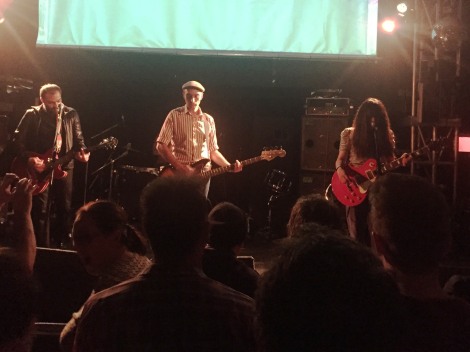 I missed the start, but caught the vast majority of their set. They played a fair few songs I knew, as I’d bought their Am I Vertical? album last year, having seen reviews comparing them to The Fall. The title track was the first number I caught, while The Fall influence was most noticeable on East Beat, a real highlight.

The band were a sight to behold, with two lovely, often wailing, red guitars (including one that looked very much like a Gretsch, my favourite guitar) and flat-capped bassist Lakis often playing with his back to the audience, a la Stu Sutcliffe. Drummer Marilena thudded along to great effect. They ended with Disaster, which they dedicated to Athens!

Lakis from The Callas

I didn’t manage to spot Kev, who no doubt had followed me from Anfield to the festival, and was in the same room, according to the wonders of Facebook. I headed over to Blade Factory next for the plumped-for-to-fill-a-gap-between-bands-I-wanted-to-see Noveller., not to be confused with indie popsters Novella, whose album Land from this year is currently a regular on my ‘turntable’.

A can of not-quite-cool-enough Red Stripe helped to overcome the stifling heat, but unfortunately the music of filmmaker Sarah Lipstate did very little for me, although the rest of the crowd seemed enraptured. She is from Brooklyn, and performed instrumental soundscapes with just a guitar. However, it all rather washed over me, so I decided to head elsewhere.

I went to Camp for Kandodo 3, a side project of Simon Price from The Heads, who I’d heard of but never heard. I tried a half of Liverpool Craft Beer’s Love Lane as I knew I’d be heading next door shortly.

Despite their numeric billing, there were actually five of them as they were topped up especially for this occasion by Paul and Rich, both playing “axe”, with the bassist clasping his instrument at an impressive angle. Their instrumental, droney sound recalled the wonderful Wooden Shjips, Hookworms and Swans, leaving me somewhat disappointed that I wouldn’t be able to see The Heads due to schedule clashes. 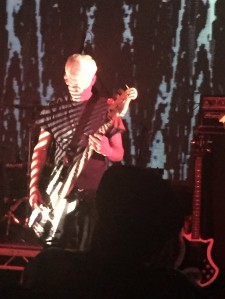 It was then time for me to move next door to Furnace, where I had a top notch-looking four-in-a-row to look forward to, starting with Mackems Slug, whose leader Ian Black used to be a touring member of Field Music, with the Brewis brothers forming part of both bands, with their sound closely replicating the off-kilter Field Music-esque Ripe album.

I spotted some of local psych heroes Strange Collective by the loos, who I’d missed earlier that afternoon. They were certainly dressed less formally than Slug, who were all sporting bow ties and waistcoats.

They played a fair chunk from Ripe, with highlights including the squalling guitar on Greasy Mind and the very funky Running To Get Past Your Heart. After the ominous At Least Show That You Care, the set ended with Kill Your Darlings.

While I’d been watching Slug, I’d discovered via Facebook that someone I knew via the football, Neil, was in the bar area, so I popped out to find him between bands. I’d actually been to see Wooden Shjips with him at The Kazimier back in September 2011, so wasn’t at all surprised to find out he was at Psych Fest.

We wandered back into the main hall to see Jane Weaver, whose The Silver Globe album I’ve grown to love over the past few months. Although, I’d never have considered the record to be psychedelic in any meaningful way, I was very much looking forward to seeing her live.

She kicked off with Argent, which featured some nice melodica, and reminded me of a cross between Cocteau Twins and the much-missed The Projects, who I saw live fourteen (!) times at the start of this millennium. 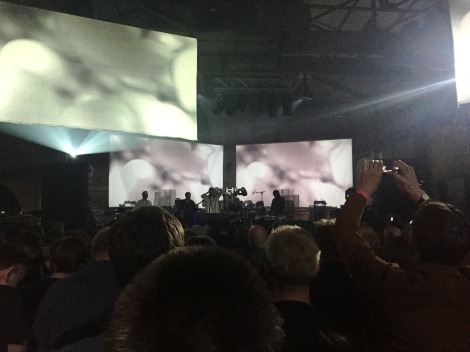 The poppy Mission Desire featured some great choppy guitar, while she introduced Don’t Take My Soul as “our pop number”. There were a smattering of somewhat malapropos “Weaver” chants, that I suppose at least showed her appeal to the crowd, with the set ending with new single I Need A Connection.

The evening was starting to get a bit warm, so I cooled down with another Red Stripe, and another chat with Neil, before heading down the front for Hookworms. Before they came on, what sounded like a remix of Yoko Ono’s Dogtown from her 1981 Season Of Glass album (the one with the tasteful cover featuring John Lennon’s blood-stained glasses…) was played, which was a pleasant surprise.

I can’t identify any Hookworms songs, much like when I saw them at The Kaz last October (see my review here). They were a beautifully intense experience again, with a proper mosh pit developing, and some rather incongruous clapping along. 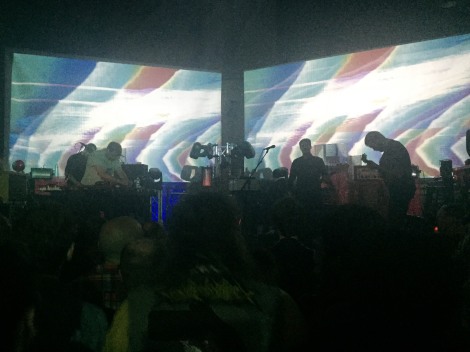 After the band, the DJ rolled out some more post-punk classics that were far from psychedelic, including Bauhaus, Gang Of Four and Television Personalities’ glorious Part Time Punks.

Shortly before the headline act, Spiritualized, I came over a bit queasy, and had to rush to the toilet, mainly to get some air. Unfortunately, that meant my enjoyment slightly suffered as I ended up stood right at the back, feeling a little bit delicate and nursing a pint of water. 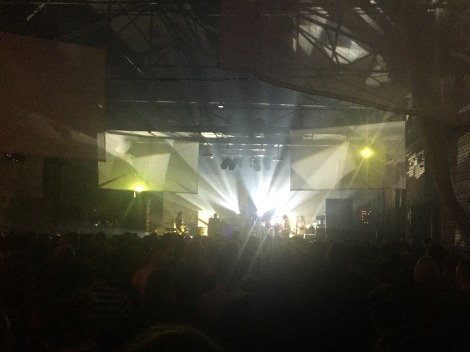 An early highlight was Electricity from Ladies And Gentlemen We Are Floating In Space, soon followed by the intense, gospelly Shine A Light from their debut album back in 1992. I managed to last about an hour before I decided to beat a retreat before the whole crowd left, in a somewhat futile attempt to get a taxi nearby, as it was now gone 1am. That meant I apparently missed them playing the Spacemen 3 classic Take Me To The Other Side.

A bit of a downbeat ending to the night for me, but eight bands (including seven I really enjoyed) for well under £40 was a great evening, and I really hope to be back at the festival next year, for one or both nights!

Here is some of the night’s music on Spotify: