A real rarity of a gig as I got to see Guided By Voices at Village Underground in London, their first show on these shores for almost sixteen years!

When I went along to the University Of London Union with my mate Kris in September 2003 to see GBV I had no idea that I would not get another chance for such a long time.

Back then, I didn’t really know the Dayton, Ohio band all that well, having first picked up 1999’s eleventh album Do The Collapse from the much-missed Stand Out! Records in Ladbroke Grove in October 2002.

I had acquired the new (fourteenth) long player Earthquake Glue ahead of this first gig, so much of what they played was still unknown to me. My abiding memory of that first show is of lead singer Robert Pollard swigging an entire bottle of tequila during the set, as well as multiple beers.

I slowly added more (older and newer) albums over the years, as their output has seemingly increased dramatically. I now own fifteen of their albums, plus three solo Pollard LP’s as well as one by guitarist Doug Gillard.

However, this is barely scratching the surface as Pollard apparently reached the landmark of having released over a hundred albums in April 2017.

This claim included 26 GBV albums (already now up to thirty) and 25 solo records, so there are allegedly another 49 albums under various other pseudonyms. I’m afraid that life is too short to investigate them all!

On this rare visit to these shores, they were playing two nights at the 700-capacity Village Underground, and I rapidly snapped up a ticket to the first of these when they went on sale earlier in the year, in the knowledge that I would be able to arrange a work trip down around the show.

I met up with a couple of the Trust The Wizards trio in The Crown And Shuttle pub before the gig, a convenient fifteen minutes’ walk from my office.

We caught up with some chat about my trip to Madrid for the UEFA Champions League Final, and their tales of footballing woe including a failed play-off bid (Kicker Of Elves and Leeds United) and impending administration (Rebel Rikkit and Bolton Wanderers)!

Also present and correct were a whole host of people from a GBV forum, from all around the globe, including a pair of ladies from Perth, Australia, all of whom were known to a greater or lesser extent by Kicker, the mega-GBV fan.

There was time for a couple of pints, including one of Truman’s Swift, and a burger, before heading around the corner to the venue.

This was to queue up for access, shortly before doors were due to open, and a full hour before the band were due on stage. Such was the eagerness of this bunch of GBV devotees. There was to be no support act as GBV typically play for two and a half hours.

Still, it meant I was able to be in the third or fourth row of people before they came on stage, although I headed back to around half-way when things kicked off properly, to allow those who wished to throw themselves around more than me the space to do so!

This was a new venue for me, a renovated turn-of-the-century warehouse, originally used as a railway coal store, that opened for gigs in April 2007.

The audience (including me, bottom left and Kicker head down, to my left)

The set-list was heavily biased towards their most recent albums, with sixteen tunes from February’s Zeppelin Over China (i.e. exactly half of the album), and another eight from April’s Warp And Woof.

However, they actually performed songs from thirteen different albums, with the oldest being 1992’s fourth album Propeller, with other songs played off LPs numbers six through fourteen and 24 onwards.

So, they didn’t play anything off albums 15-23. I have no idea why, but they seemingly played an almost entirely different set the following night, so perhaps they raided those records then. 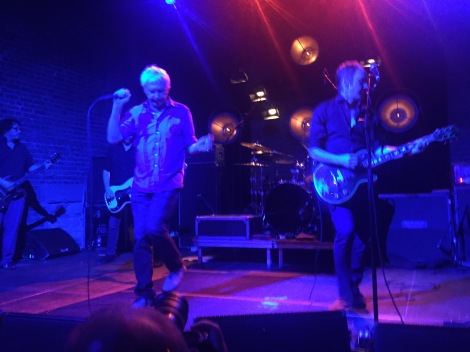 Following chants of “GBV” from the crowd, the band came out on stage pretty much at 8:30 as scheduled, to a rapturous reception, immediately kicking off with two numbers from Zeppelin, with opening song Windshield Wiper Rex apparently receiving its live debut.

There was also one new song amongst the set, Heavy Like The World, which came very early on, and fitted in perfectly, being a promising sign for the next album due in October, their third of the year. 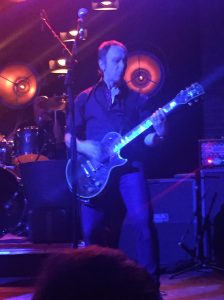 The mosh pit erupted in full force for the first time with Your Name Is Wild from 1996’s ninth album Under The Bushes Under The Stars, so it was probably at this point that I found myself edging back towards the middle of the venue to avoid the more enthusiastic punters, where I could stand and watch in relative calm.

The first real evidence of Doug Gillard’s ripping guitar work came with King 007 from 2017’s How Do You Spell Heaven. He was later featured on I Am A Tree that he wrote for 1997’s Mag Earwhig!.

He’s a much-loved member of the band, having first joined in 1997, but not re-joining after their hiatus until 2016, when the current fivesome took shape with the return of Kevin March on drums, bassist Mark Shue and Bobby Bare, Jr. on guitar.

By the way, Bare Jr. is indeed the son of country singer Bobby Bare, whom I own a compilation of 60’s singles by.

Guided By Voices (from further back)

I hadn’t realised until writing this review that March had previously drummed for the post-hardcore band Shudder To Think, but not on any of the early releases on Dischord Records of theirs that I own.

The two-hour set closed with End It With Light, from Warp And Woof. Fortunately, they were soon back on stage for a nine-song encore, chock full of their ‘hits’.

This started with Love Is Stronger Than Witchcraft, one of the two tracks they played from one of Uncle Bob’s solo albums, 2006’s From A Compound Eye, not one that I have. The other one had been I’m A Strong Lion which sounds (on record at least) like something Paul McCartney tossed off to pass on to another act in 1965. And yes, that is definitely a compliment.

I think my favourite GBV album might be Universal Truths And Cycles from 2002, which was only raided once in this set, for Back To The Lake during the encore.

Teenage FBI from 1999’s Do The Collapse featured a typically great guitar solo, while the bouncing mosh pit erupted into great fury from Echos Myron onwards, from 1994’s (*controversial opinion alert* much overrated to my ears) Bee Thousand.

The night came to a satisfying close with Glad Girls from 2001 LP Isolation Drills.

GBV remain a band I really like, but the night clearly illustrated that there are many people out there who love them a great deal more than me, as the audience was as wildly enthusiastic as I’ve seen a crowd for a long time.

It was great to see them after so long away, although sadly I can no longer claim to have been at their most recent UK show as they were back the next night.

Bob was on fine form throughout, again downing most of a bottle of tequila and several beers, with his speech only slurring slightly as proceedings developed. He was a highly engaging frontman, telling any aspiring songwriters that they had some catching up to do to match his output.

He also announced pretty much every song, including saying what album it was from (if he could remember), and even what label, as they have been through a fair few, including the more well-known Creation in the UK and Matador in the US.

There were loads of Guided By Voices t-shirts amongst the crowd, the largest number of tees from the band playing that I’ve seen at a gig for a long, long time.

I was in my red GBV t-shirt, while I also spotted Sonic Youth, The KLF, Pollard spin-off Circus Devils and (hurrah!) The Fall ones.

Here is a very brief sampling of the music from the night on Spotify: