I’ve been a fan of Elvis for more than twenty years, but had managed never to catch him live before his most recent visit to his hometown. I’ve done quite well to avoid him as this was his fourth concert in Liverpool since I moved up here, and he obviously played many times in London while I was down there. Still, there’s a first time for everything.

The ticket announced that the show (on his Detour tour) would be from 8pm until 11pm, with no support, and I’d read that it was just to be Elvis on his own, which sounded like a pretty intense evening for the former Declan McManus. I made a point of getting to the Phil before 8 as gigs always start on time there, so there was no time for a pint beforehand.

As I got to my seat, I realised that I had not picked the best option, although as I had booked some time after the concert was announced, I recall there being limited choice remaining in the stalls. I was on the very back row, but right slap bang next to the mixing desk in the centre. However, all the equipment being used meant I could only actually see half of the stage!

My view of the stage

Despite being told otherwise, there was actually a support act, Larkin Poe, two sisters from Atlanta, Georgia. Both of them sing, with Rebecca playing guitar and Megan a curiously-slung lap steel guitar. They were backed by Marlon Patton on drums.

They featured alongside Costello on the Lost On The River: The New Basement Tapes album based on old Bob Dylan lyrics released late last year. Their sound was very Southern, sounding a bit like the little sisters of The Allman Brothers Band (a comparison I have stolen from here).

They segued Hey Sinner into the African-American work song Black Betty, made famous by Ram Jam, amongst others. They were quite a charming pair, making a long-winded introduction to Jesse, a fictional song about a real aunt of theirs.

The arl fella next to me was fairly subtly decanting some whisky into a Diet Coke can, with his wife doing something similar. As I had no equivalent set-up, I hot-footed it to the bar at the interval in an attempt to get a drink. As usual, the Phil was not serving pints during the show, but they had also very unhelpfully failed to even make a token effort at filling the fridges on such a warm day, so while waiting to be served by the rather inefficient bar staff, all of the cold beer ran out. So I gave up.

Before the main event, various Elvis videos were played on the big TV screen on stage. There was also a slide show featuring a range of people and places presumably held dear by Costello, including some footballers (Gary Ablett, Robbie Fowler, Bill Shankly, Jon Flanagan and token Evertonian Dixie Dean), The Merseybeats, The Swinging Blue Jeans, Pete Best, Ken Dodd, Leonard Rossiter as Reggie Perrin, and the Meccano factory.

There then followed the video for The Monkey Man, from 2004’s The Delivery Man album:

Out strode Mr Costello, unaccompanied as advertised. He launched straight into (The Angels Wanna Wear My) Red Shoes, the first track on side two of his debut My Aim Is True album from 1977. It obviously sounded quite different to the original version, at nearly forty years’ distance, and without the backing of Clover as on the album, who later mutated into Huey Lewis And The News.

In fact, although many of the songs were very well known, most of them sounded quite different when played solo, often with quite altered arrangements. Perhaps not quite to the Bob Dylan extent of making songs sound completely unlike the recorded version, but still different enough.

After a couple more fairly early songs (Watch Your Step from 1981’s Trust, and Accidents Will Happen, a top thirty hit two years earlier­), he headed into newer territory. That meant a fair few songs I didn’t recognise as I only have two of his albums since 1986, and none since 1998.

He paid homage to his hometown, describing it wryly as the “city of love and sunbeds”, and was in talkative mood as the evening progressed, telling tales of his time as a computer operator in Netherton, and of his father’s career as a nightclub singer and his grandad’s time on the ships. His dad (Ross McManus) in fact featured on the same Royal Variety Performance bill as The Beatles in 1963.

Just moments after the arl fella next to me tapped me on the shoulder to ask bemusedly “is he going to play all his old songs like Oliver’s Army?”, having obviously failed to recognise any of the preceding numbers, he in fact sang that very song, his biggest ever hit and one of just three Top Ten singles he’s ever had.

Elvis moved to the piano for a fabulous reading of the incredibly moving Shipbuilding, probably most famous for the Robert Wyatt cover version that became Rough Trade’s first ever national Top 40 hit in 1983. I’ve always loved this song, especially the wonderfully-rhyming lines “somebody said that someone got filled in, for saying that people get killed in, the result of this shipbuilding”.

The only problem being that the piano was on the left-hand side of the stage, meaning I couldn’t see Elvis at all. He then stayed there for a radically reworked I Can’t Stand Up For Falling Down, originally by Sam & Dave, here turned into more of a ballad.

Fortunately, he then moved over to my side of the stage, sitting down to sing Walking My Baby Back Home, first recorded by Broadway Syncopators in 1930 before telling a lengthy, possibly apocryphal story about his dad and Blackpool. He also covered Charles Aznavour’s She.

He played some great guitar in an unsurprisingly well received, fervent Watching The Detectives, before a wonderful medley of Nick Lowe’s When I Write The Book and Everyday I Write The Book from 1983’s fantastic Punch The Clock.

Elvis having a sit down

I was somewhat surprised when he left the stage after eighty minutes of what the ticket and website seemed to claim was going to be a three hour set, but he soon returned for the first of four encores, following a video of his dad singing If I Had A Hammer, made famous by Pete Seeger.

He was joined by Larkin Poe for several numbers, including Goodbye Cruel World’s Love Field, and That’s Not The Part Of Him You’re Leaving, during which a young Steven Gerrard was on the TV screen, a further reminder of Elvis’s red credentials. 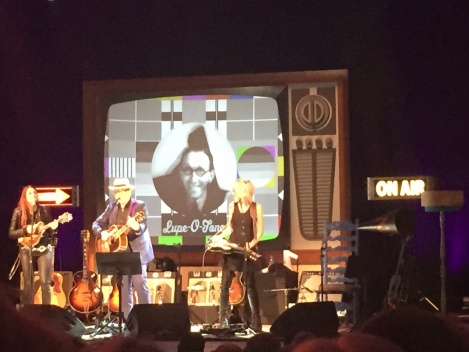 After a fabulous Blame It On Cain from his debut album, he left the stage again, re-emerging inside the giant TV set for another two classic oldies in Alison and Pump It Up. Larkin Poe came out again for the gorgeous country tune Good Year For The Roses, first recorded by Elvis in 1981, with some great harmony work by the American ladies, and then Brilliant Mistake off King Of America.

Elvis and Larkin Poe in the TV set

Costello returned to the piano for Side By Side, an austerity ballad originally recorded by Cliff Edwards in 1927, then sat down with a ukulele to play Who’s The Meanest Gal In Town Josephine, another old standard. The show ended, for the third time, with Jimmie Standing In The Rain from 2010’s National Ransom.

I stood to applaud, preparing to head for the nearest pub for a quick-fire pint before catching the last train home as it was now pushing 11pm. However, Elvis reappeared for one final time, with Larkin Poe in tow again, for a rambunctious (What’s So Funny ‘Bout) Peace, Love, And Understanding, a song written in 1974 by Nick Lowe when he was in Brinsley Schwarz, but made more famous by Costello four years later. 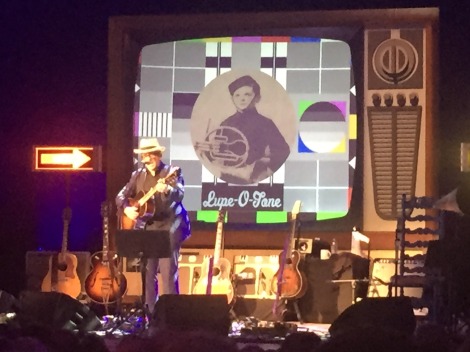 So after around two and a half hours on stage, Elvis finally left the stage for good, having finally got the crowd to its feet at the very end. It had been a great evening’s entertainment, although it now leaves me wanting to see him again, but this time with The Attractions, or another back-up band.

His voice must be one of the most underrated in music today, powerful and intense enough to cope with the range of songs chosen, from his own, older numbers through much more recent tracks, as well as the old standards he scattered across the set.

I had a very speedy pint at the Philharmonic pub before heading for my train.

I decided on my red ‘this guitar kills fascists’ Woody Guthrie t-shirt, with the only other ones I spotted amongst the less than youthful crowd being The Clash and the mighty Half Man Half Biscuit.

Here is most of Elvis’s set: